India’s total installed solar capacity including rooftop and off-grid segments has crossed 10 GW mark, a major milestone for the sector.

India is expected to add new solar capacity of 5.1 GW this year, which is a growth of 137% over last year. BRIDGE TO INDIA expects average annual capacity addition of 8-10 GW per annum from next year onwards. The pace of sector activity has picked up tremendously in the last two years (see chart below) because of strong government support and increasing price competitiveness of solar power. India is expected to become the world’s third biggest solar market from next year onwards after China and the USA. 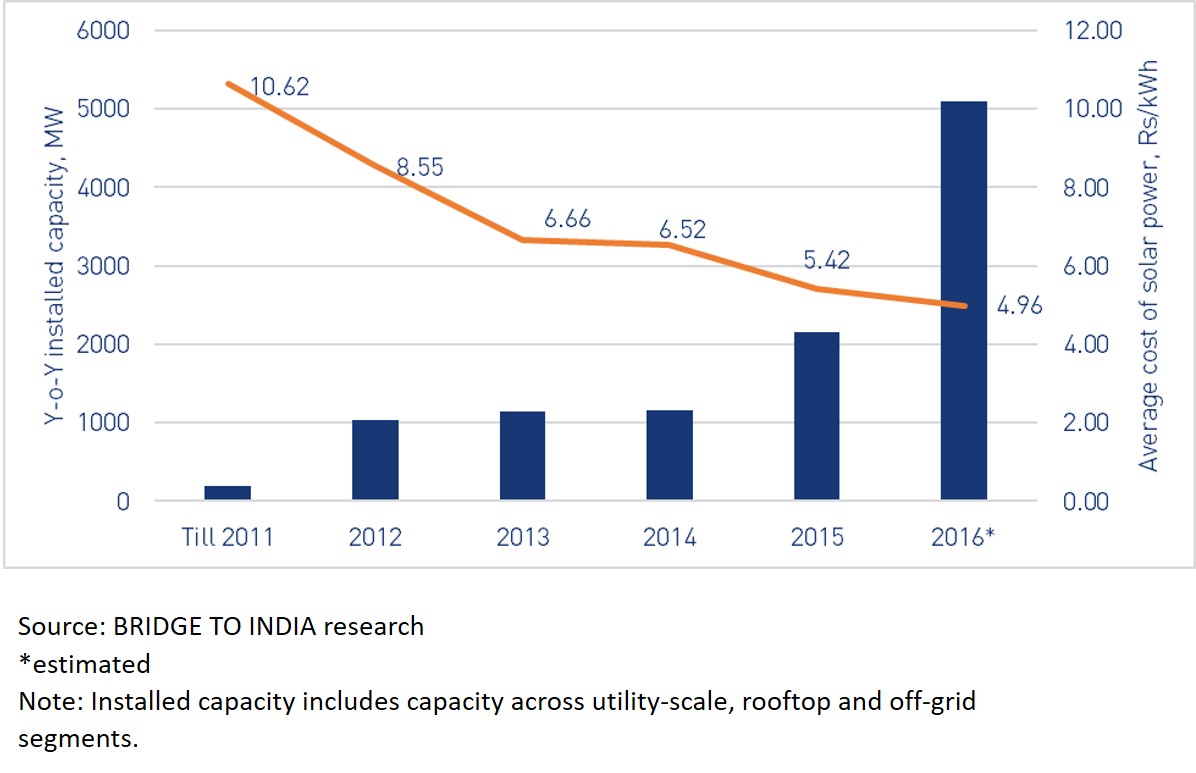 After the BJP government came to power in 2014, it announced a major policy shift in India’s energy sector by multiplying the 2022 solar target five-fold to 100,000 MW. Since then, it has launched multiple policy initiatives to support the sector. Ujwal DISCOM Assurance Yojana (UDAY) scheme is probably the most important such initiative as it seeks to strengthen India’s weak distribution sector. The policy has already shown extremely positive results in the short-term. At least eight of the 17 states/union territories including some of the worst performing states like Haryana and Uttar Pradesh that have joined the UDAY scheme so far have reduced the deficit per unit of electricity. Moreover, 13 states/union territories have reported a material decline in Aggregate Technical and Commercial (AT&C) losses.

The solar park scheme has also been very instrumental in tackling the two major issues of land acquisition and power evacuation for project development. The government originally envisaged to develop 20 GW of solar park capacity by 2020 but the scheme has had an enthusiastic response from the private sector and the government is already planning to double this capacity to 40,000 MW. Further, eight green energy corridors are under construction, with financial assistance from German development bank KFW, to evacuate and integrate growing share of renewable energy into the grid. The corridors will allow transmission of solar power from solar rich states to other states.

Some key themes can be observed in the growth of the Indian solar market so far. Amongst states, Tamil Nadu has the highest installed capacity, followed by Rajasthan, Andhra Pradesh, Gujarat, Telangana, Madhya Pradesh and Punjab. These seven states collectively account for more than 80% of total installed capacity as of mid-November, 2016. Some of the larger power consuming states such as Maharashtra and Uttar Pradesh are way behind in the sector.

Utility-scale solar accounts for more than 85% of total installed capacity. Rooftop solar, so far about 10% of the sector, has also been growing at a very healthy CAGR of 98% from 2011 to 2015 and is expected to play an increasingly important role in the sector. Improving net metering implementation and subsidy disbursal are expected to lead to significant demand boost for rooftop solar across all consumer segments. There is also a very strong impetus on increasing rooftop solar deployment in government-owned buildings. Around 1.5 GW of potential rooftop solar capacity has been identified in central ministries and departments alone.

The off-grid segment, which is important from the point of view of increasing access to electricity and relieving stress on the transmission grid, has reached only 360 MW till mid-November 2016. With the government committed to expanding the grid and aiming to provide 24×7 electricity throughout India by 2018, this segment is unfortunately expected to perform below potential.

The growing market has attracted attention of leading investors from both India and other countries including USA, Europe, Japan and China. The list of active project developers in the market includes very prestigious names including Softbank, Fortum, CLP, Adani, Tata Power, ReNew and First Solar.

Many people are going to ask the obvious question – if we have taken more than 5 years to achieve 10 GW, can we reach 100 GW in another 5 years? It is a very steep target in our view. But rather than quibble about the target, the important point is to acknowledge the transformational economic, environmental and social potential of solar technology and to create a conducive environment for its growth.