Since 2014, around 29 GW of utility scale solar tenders have been issued in India. Most of this capacity (81%, 23.5 GW) has been tendered by NTPC, Solar Energy Corporation of India Limited (SECI), distribution companies (DISCOMs) and other public sector entities for project development by private sector. But there is also a sizeable 19% (5.5 GW) tendered in the form of EPC contracts, where capital investment will be made by NTPC and other public sector companies including Karnataka Renewable Energy Development Limited (KREDL) and Andhra Pradesh Power Generation Corporation Limited (APGENCO).

Figure: Status of projects under project development and EPC tenders issued since 2014 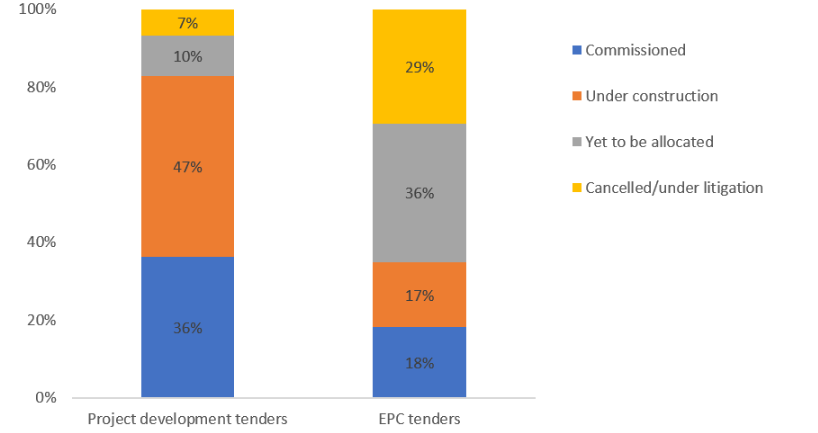 The poor progress in EPC tenders is as predicted by us last year. Despite that, public sector companies continue to bring out more EPC tenders – more than 50% of new tenders issued in Q3 2017 were structured as EPC contracts.

As against an average 2-5 months taken between announcement and allocation of project development tenders, allocation of EPC tenders by public sector companies has taken an average of 6-8 months. Some of these tenders including NLC Tamil Nadu 500 MW and NLC Odisha 250 MW were issued almost a year ago but they have not yet been allocated. Moreover, some tenders including CIL 200 MW and KREDL 200 MW have been issued, cancelled and subsequently reissued with modified requirements. The frequent cancellations as well as delays reflect low market interest for such tenders.

Perhaps because of slow progress in EPC tenders, we have observed a strange practice where public sector companies are now bidding aggressively against private sector competitors in project development tenders. Recent cases include NLC winning 709 MW capacity in the Tamil Nadu 1,500 MW tender and Gujarat Industries Power Company Limited (GIPCL) and Gujarat State Electricity Corporation Limited (GSECL) together winning a total of 150 MW in the Gujarat Urja Vikas Nigam Limited (GUVNL) 500 MW tender. As per our estimates, expected returns for both these tenders are significantly below market expectations.

There was a strong public sector role envisaged in development of solar projects back in 2013/14, when capital costs were much higher and investment appetite of private sector was not established. Today, when there is ample private capital available for the solar sector at very attractive terms and when there is a slowdown in tender issuance, there is absolutely no justification for public sector to crowd out private investments. The government needs to rethink the role of public sector companies in clean energy sector.