Last week, we discussed the proposed changes in the Electricity Act 2003 and, in particular, the proposed 10.5% solar RPO target (refer link 1 and link 2). To give the market further impetus, in the past few days, the government has announced fund allocation for solar parks infrastructure, viability gap funding for public sector led projects and new funds for canal-top solar (refer). However, growing the market from 1 GW a year to 15 GW a year requires a deeper, sustained, market-level effort making the economic fundamentals irresistible. 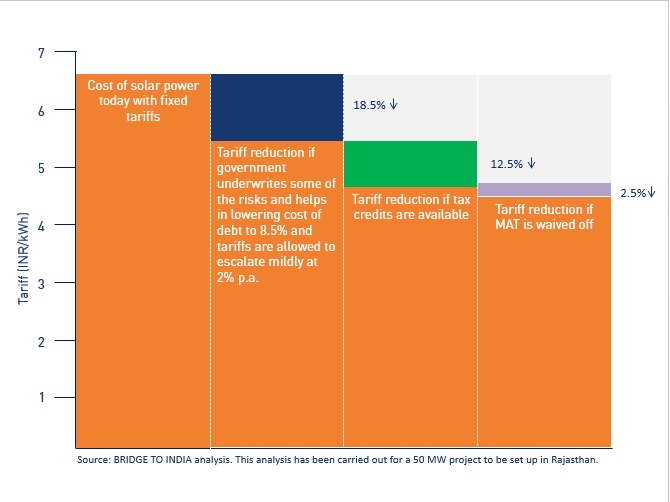 India cannot afford the luxury of a publicly funded energy transition like in Germany, where consumers spend upwards of € 20 bn a year to subsidize renewables through higher power prices. The good news is that with the solar technology becoming increasingly efficient, subsidies are no longer required and the government can tinker with other parameters to make solar competitive with conventional power.  BRIDGE TO INDIA estimates that if cost of debt financing can be reduced to 8%, tariffs can come down to INR 5.4/kWh with an annual escalation of 2% per annum. Solar Energy Corporation of India (SECI) is already planning a 750MW project in Madhya Pradesh along similar lines in collaboration with the World Bank.

To make the 100 GW target realistic, the government needs to improve access to and reduce cost of international debt. One way of doing so may be to provide comfort to the international lending community on currency and discom insolvency risks. In addition to this, there are other complementary measures that would support the desired uptake of solar. If solar is cheaper than other sources of new power generation capacities, the difference will induce discoms and consumers to switch.

There are other tools in the government kitty to make solar more attractive. India currently allows an accelerated depreciation benefit (the value ranging between INR 0.5-1/ kWh) for profitable corporate entities to invest into solar. In addition, the finance ministry already has a proposal on its desk to allow similar income tax benefits to tax-paying individuals. However, both these provisions are restrictive in that they address only companies or individuals who have a tax burden and also want to invest into solar. There is no reason, however, why these elements should be bound together. It also discourages professional, project-based equity investment in the sector, which is much needed for achieving the ambitious new targets. We suggest to decouple the tax benefits from the solar investment and instead make it a tradable benefit. This has been done in the US, where the tradable tax credits attract large amounts of institutional and international capital to the sector.

A third potential measure could be a waiver of the Minimum Alternate Tax (MAT) of 19.8% for solar projects. Here, a case can be made that new (and clean) energy infrastructure would create much more additional tax revenues through growth in production, employment and consumption, than the loss of MAT revenues from solar projects.

If these structural changes can be incorporated in the upcoming budget, along with procedural changes such as ensuring intended use of the clean energy fund and more allocations to the MNRE, we see India on track to achieve its ambitious solar goal of 100 GW by 2022. An important further point of consideration is political: The center needs a buy-in from the states for a 10.5% solar RPO target. This buy-in should be much easier, if solar is a winner and not a cost of financially weak state discoms. The above measures could ensure that.