Most of the discussion revolved around regressive changes in net-metering policy across many states. States have been gradually withdrawing net-metering from C&I consumers and/ or scaling back banking benefits. For example, Uttar Pradesh disallowed net-metering for C&I consumers and Karnataka revoked net-metering for OPEX model recently. As a result, rooftop solar market has been stagnant or even declining since 2018 despite being one of the cheapest sources of power at the point of consumption. Capacity addition in 2020 is estimated at only 990 MW, down 35% over previous year. 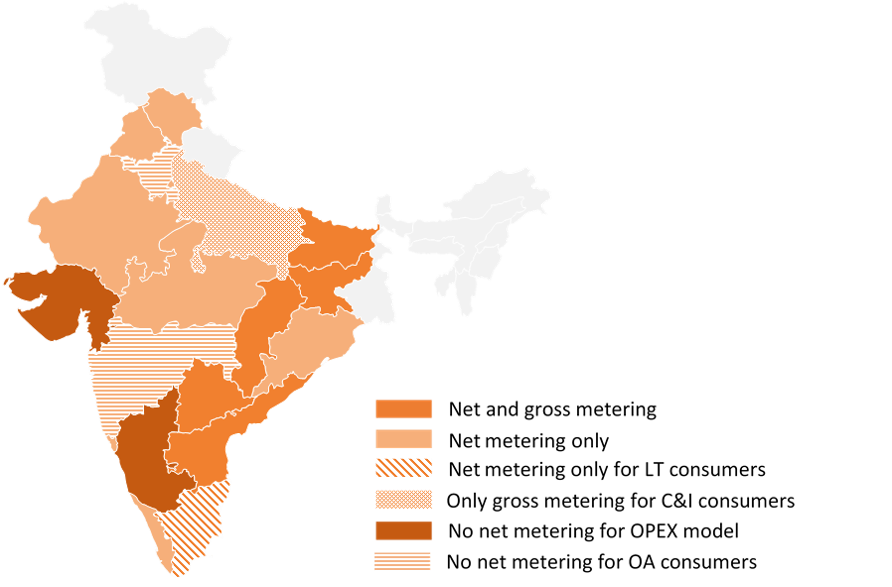 All the panellists agreed that policy inconsistency and instability have hurt market prospects. Mr. Joshi mentioned that “overnight U-turns” by state regulators have been troublesome and good intentions for policy change have not been followed up with actions on ground. Another panellist added that it is challenging even to track frequent policy changes across states. The developers agreed that Gujarat, Karnataka and Tamil Nadu have been more challenging states for C&I consumers. However, states like Maharashtra and Kerala provide a useful policy template for other states to follow.

Financing rooftop solar systems has been a persistent bottleneck for the sector. Mr. Shah from IREDA offered a major piece of positive news. MNRE has been working with IREDA to arrange lines of credit aggregating USD 100-125 million from development banks particularly for residential and SME consumers. Depending on market response, the lines could be scaled up to USD 500 million or more in future. As lack of a nationwide branch network has restricted IREDA’s presence in the market (financed only 40 MW of rooftop solar projects so far), they are aiming to channel this financing to system aggregators and other lenders with stronger distribution network.

There was also a brief discussion on impact arising out of BCD imposition, which could be a setback for the market. The government has announced plans to impose the duty from April 2022. A potential 40% duty on modules would raise cost of rooftop solar power by 20-25%. But most developers seem relatively optimistic and feel confident that the market would be able to manage any downside impact with the benefit of learnings from safeguard duty imposition. Change in law provisions have become quite standard in contracts and are well accepted by both consumers and suppliers. Moreover, the panellists opined that even after the proposed duty, rooftop solar would continue to be highly cost beneficial to consumers. Mr. Arijit from LONGi argued that the government should first empower domestic supply chain and only then seek to introduce such duties.

Overall, there is a major disconnect between rooftop solar targets and policy environment. The sector needs a consistent and uniform policy framework to achieve its potential.